​2017 MEET THIS YEAR'S PIONEER BREEDER RECIPIENT
​This year’s winner of the Pioneer Breeder Award started milking Holsteins with their family before graduating from high school in 1966.  After the passing of his father, his mother sold the family farm a few years later.  They married in the summer of 1969 and started farming.  They have farmed on her home farm since 1970.  They milked Holsteins when they started out.  In 1975 they purchased their first Guernsey cow from long-time Guernsey breeders Francis and Rose Feldmann.  In later years they helped sisters start exhibiting dairy cattle at the Guernsey district shows, county fairs and Iowa State Fair.
This year’s winners have shown perseverance, dedication and love for dairy. They have come back from devastation more than one time.  In 1992 their farm was hit by a tornado and 2002 their home was destroyed by a fire.  These travesties didn’t knock them down but make them more determined to rebuild.  These producers represented the Guernsey Breed for 15 years at the Iowa State Fair on the Boulevard of Dairy Breeds.  Don and Glenda have since partially retired from milking in 2013.  They still raise heifers so their grandchildren can continue showing.  Even the occasional cow till show season is over.
Dedication to the dairy industry was evident early their dairy farming career.  From helping sisters start showing to having their own 3 children showing cattle at or before the age of 5.  Dairy has been very important to this year winner.  They started having wins in the show ring in 1979 when Glenda’s sister cow was named Grand Champion Guernsey at the Iowa State Fair.  Their children have had their own success in the ring.  Stacy has had the the 1st Supreme Champion Guernsey Cow at the Jones County Fair, Mike has had the honors of Grand Champion at the State Fair and Jessie’s top win has been Reserve Grand in the Junior Show at the World Dairy Expo.  The success in the ring doesn’t stop with their children.  Their grandchildren have now joined the ranks with their Guernsey’s.  Austin has won Supreme Cow at National Cattle Congress, Ashlynn has won Reserve Supreme Cow at the Jones County Fair, Dana has won Reserve Grand Champion at the ISF, Jacob exhibited the Junior Champion at the ISF, Carter’s Guernsey’s received Jr. Champ at the Linn County Fair, Madison and Sydney have each been showing their Guernsey’s in Kiddie Dairy Shows.  Along with these wins the Eilers have received several Honorable Mention All American animals.
Not only have the Eilers had success in the show ring they have also had the honor of having the 2001 World Record for butterfat with Sandy Hill Wanda’s Winnie with 2320# Fat.  Not only was this cow putting milk in the tank she was also the 1995 World Dairy Expo Reserve Grand Champion of the Junior Show.  Rolling herd average was 20,400# Milk, 900# Fat and 690# Protein.  Their herd has ranked 2nd in Iowa for Production and have been 4th on the CPI list.  They have also had their cows on the top 100 CPI list.
Long time enthusiast of the Guernsey Breed they have been active in their County Dairy Board, previous Guernsey District Board and now the Iowa Guernsey Board.  They have been active in the planning of the National Guernsey Conventions that Iowa has hosted.
Please join me in Congratulating Don and Glenda Eilers this year’s Pioneer Breeder Award Winner. 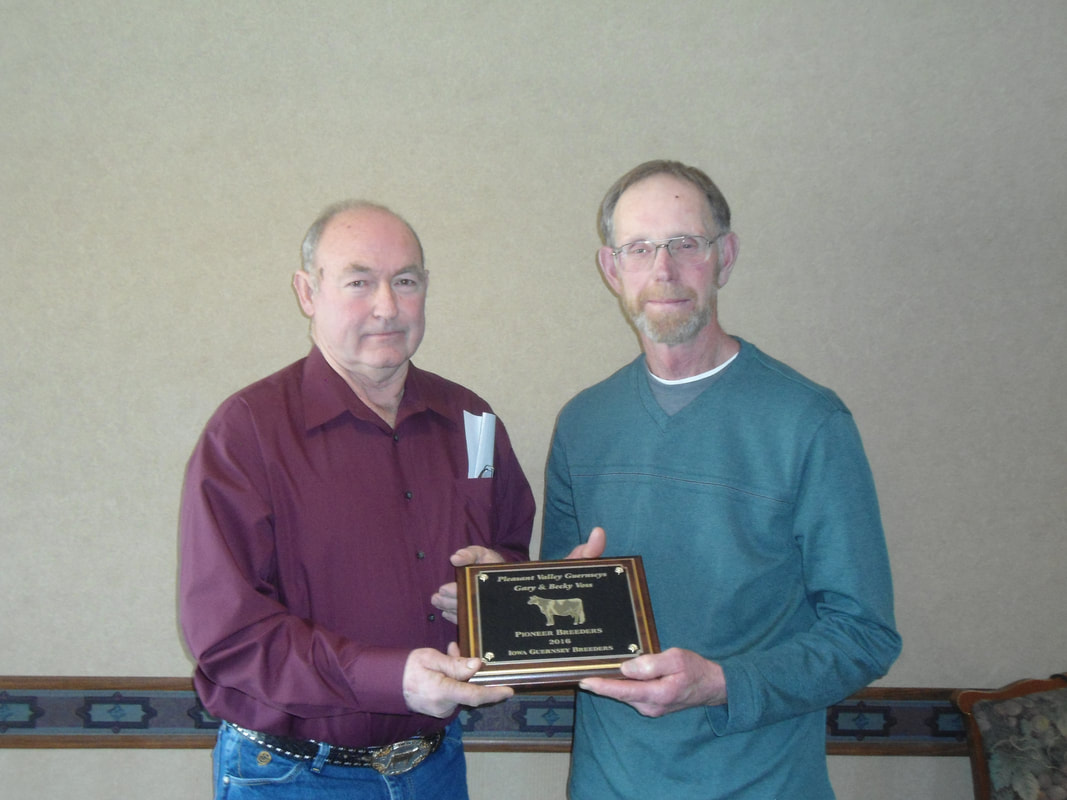 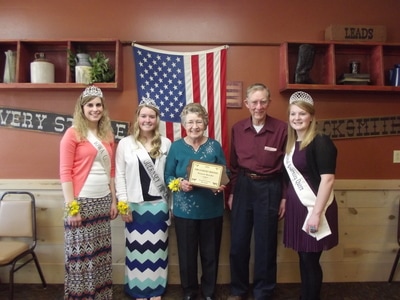 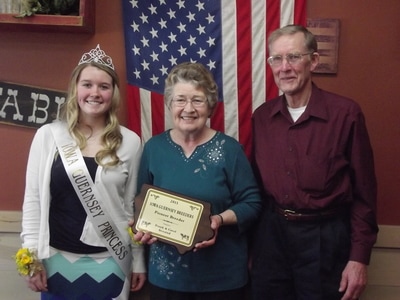 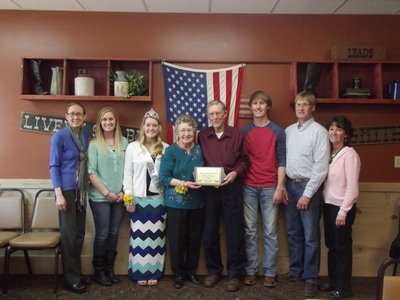 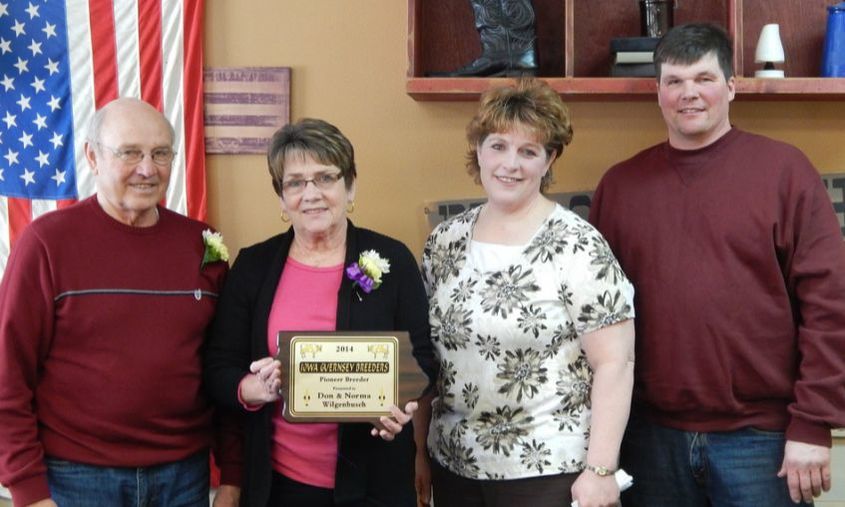 The Pioneer Breeder award is presented annually to an individual who represents the rich tradition of the Iowa Guernsey Breeders' Association.  This year's recipient is someone who has had my love & respect for a very long time.  He is someone that I know that I can go to at any time for anything.
This individual is not someone who just tells you what he thinks - unless you ask him.  And Lord knows, I've asked him plenty.  I learned through the years that he definitely had our best interests at heart.  We listened because we knew he wasn't just talking to be talking.  We knew that the answer you're going to get has much thought behind it.  I've never known this person to be jealous or heard him speak negatively about anyone.  This person has always given me the impression that he truly wants people to succeed and be happy.  He has given Randy and I as much good advice and help through the years as our very own family has.  Don Wilgenbusch has been just like a father to us and he is very deserving of the Pioneer Breeder award.
Don Wilgenbusch grew up on his family's 229 acre dairy farm in Rickardsville, Iowa.  The farm has been in the Wilgenbusch family for over 100 years and is one of Iowa's Century Farms.  His father and mother, Ralph and Mabel, bought the farm in 1942 from Mabel's mother.  His father, Ralph, served on the Dubuque County Conservation Board and was instrumental in developing the contour strips that are seen on the picturesque rolling hills that their beautiful Guernseys call home.
Behind every good man is an equally good woman.  Don married Norma Klein in September, 1965 and together they raised 3 wonderful children.  Their youngest son, Jason is now the 4th generation to milk Guernseys on Highway 52.  Jason married Jessica in 2009 and they have 2 children.  Their son, Carter is the spitting image of Jason and the future of the farm.
Don has always been a religious man and a very good family man.  He's also been very involved in his community.  He was a 4H leader for many years, has served on the RHCL School Board, the Swiss Valley Advisory Board, and a member of the Dubuque County DHIA Board.
He started testing cows with DHIA in April of 1950.  They have a small farm and it is the cleanest farm I have ever stepped foot on.  They have a philosophy to set goals and then follow through.  From what I can tell, whatever they're doing - it sure works.
They have bred many excellent, high producing cows through the years.  My favorite is a cow Donnie sold to Randy and I.
Miss Best.  She scored Ex-93, was a Total Performance Cow winner, was on the CPI list, a Nasco Type & Production award winner, and a two-time Reserve All American.  She had 2 Ace daughters that scored excellent.  Her 3-04 record in 365 days was 28,505  6.4%F  1812  3.4%P  959.
She has many descendants in our barn today, including a bull - Best Buy that we have marketed semen from across the country.
Another cow we purchased from Donnie & Jason was Popcorn.  Popcorn scored Ex-90.  Donnie wanted us to take her to Madison.  Randy and I tried very hard, but we could not get her to walk on the halter.  We were ready to forget about it.  We called Donnie to let him know and all of a sudden, Donnie & Jason showed up and in no time, they had her leading like a charm.  It was a good thing because we took her to Madison and she won a production award with a record of
34,363 lbs. of milk, 5.9%F  2,022 lbs. of fat, 3.1%P  with 959 lbs. of protein.
Another time we bought a couple of really nice young cows from Donnie & Jason.  They all 3 had bull calves.  We were working in the barn one day, shortly thereafter and Donnie pulls in with a brand new heifer calf.  Donnie felt bad that we didn't get a heifer from one of these cows, so he just gave us one of his own.
When we bought our farm, there was much planning involved.  I can still see Donnie & Jason walking around with Randy with pencil, paper and tape measure in hand.  Donnie took time out of his busy schedule to come over and help us do some planning
For these reasons and many others, our family is proud to recognize Don Wilgenbusch as this year's Pioneer Breeder.